Jordan has a hot, dry climate characterized by long, hot, dry summers and short, cool winters. Because Jordan has a great variety of microclimates and they may vary during the year, the best time for your visit depends on your expectations or needs.

The climate is influenced by Jordan's location between the subtropical aridity of the Arabian Desert areas and the subtropical humidity of the eastern Mediterranean area. January is the coldest month, with temperatures from 5°C to 10°C, and August is the hottest month at 20°C to 35°C. Daily temperatures can be very hot, especially in the summer; on some days it can be 40°C or more, especially when the Sirocco (a hot, dry southerly wind) blows.

The climate in Jordan is conditioned partly by altitude. You have the higher central and northern areas, where it can be quite cold in winter especially during December to February, but relatively cool during the summer, while the low lying areas such as the Gulf of Aqaba and the Jordan valley are hot and humid during summer, particularly during July and August, but generally pleasant in winter.

During the peak summer months, it can get hot and is often rainless, not only in the Jordan valley and Dead Sea area, but also in the desert (including Wadi Rum), yet you need to realize that the heat in the desert is dry, so it’s a bit easier to deal with, but as in travelling to any other hot country in the summer time, a hat, protective clothes, sunscreen and staying hydrated is not to be forgotten. Summer nights tend to be a bit chilly at times, so keep a light jacket or pashmina with you.

On average, Jordan only gets 30 days of rain a year in the highlands, but rain showers tend to be sharp and short. Occasional snowfall in Amman and other mountain areas can take place during the months of January and February, but is often short and melts away pretty quickly. Even Petra can get the occasional fall, and the desert can be cold especially during the night time, but this varies from season to season and from year to year.

Aqaba on the other hand, is a nice exception, where on average, the maximum daytime temperature is around 20°C  in January, and is quite popular with Europeans visiting from northern, deep frozen countries, where it gives them the chance to escape the harsh winter, enjoy Aqaba and soak up in the sun.

When travelling in winter to Jordan, make sure to bring plenty of warm clothes and a waterproof jacket can be of great value.

When it comes to the best months to visit Jordan, March until the end of June, and September to November are probably the most suitable. In springtime, you can even enjoy the wild flowers in bloom.

So whether you prefer travelling during winter or summer, want to enjoy the Middle eastern sun or favors the cool breeze, head to Jordan, an all seasons destination, where each time of year guarantees you a different and great experience. 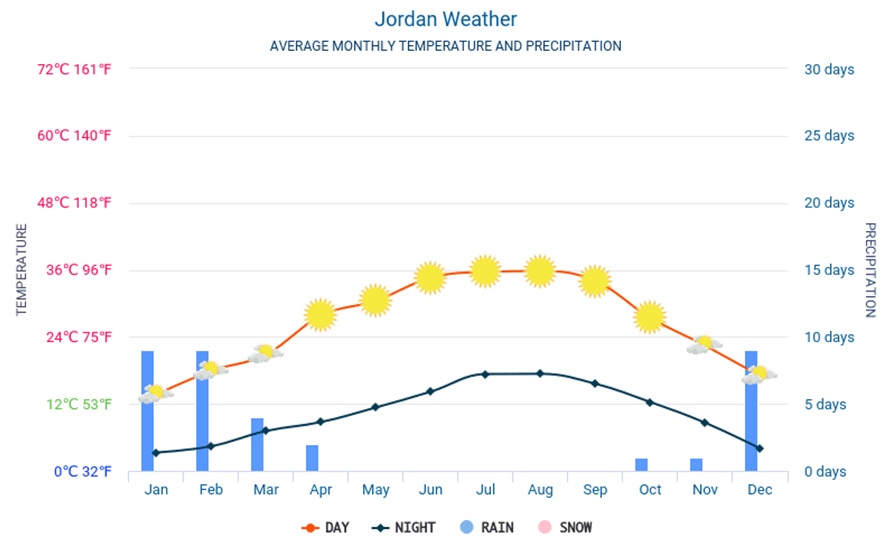